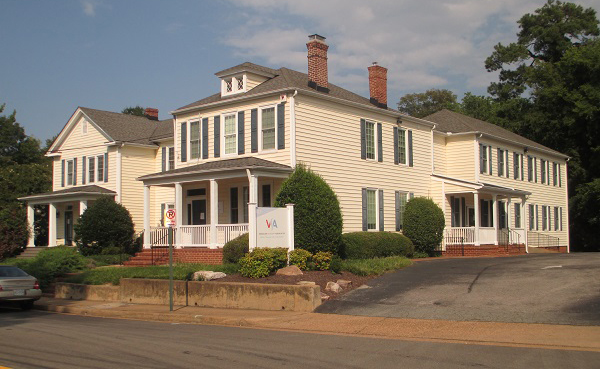 This nearly century-old, 3,700-square-foot building and its parking lot are slated to be razed and redeveloped into 26 condos. (Jonathan Spiers photo)

An influx of multifamily housing in the Libbie-and-Grove area shows no signs of slowing down, as a medical office building there is being eyed for a condominium development nearly twice the size of the nearby Tiber condos.

A permit request filed with the city last week shows plans for a 26-unit development that would replace the two-story building and parking lot at 417-419 Libbie Ave., currently home to Vascular Surgery Associates’ West End office.

The nearly century-old building would be razed to make way for a three- and four-story structure that would fill the ¾-acre site. The building would feature varying facades along Libbie and house the bulk of the condos across three floors above a partially below-grade parking garage.

Two additional units would make up the fourth floor, which would be set back from the street with rooftop terraces overlooking Libbie. A community rooftop space for all homeowners also would be provided.

Behind the project is Urban Generation Living, a New York-based developer that was involved in the condo conversion of the former One Monument Avenue complex on Stuart Circle.

The special-use permit request for the Libbie project was filed by UGL Management, a Glen Allen-based LLC that lists Stuart Cantor as a contact. Cantor is president of TitleWorks of Virginia, which shares a building with the LLC’s office address.

Cantor has been in the news lately as one of two local businessmen in the crosshairs of the trustee overseeing the bankruptcy case for Live Well Financial, the former Chesterfield mortgage company owned by Michael Hild. Cantor was one of Live Well’s earlier board members.

Conceptual elevations show the condo building with varying facades along Libbie Avenue. (Images courtesy of the City of Richmond)

Also involved in the project is Bruce Tyler, a principal at Baskervill and a former Richmond councilman and mayoral candidate. Tyler is representing UGL Management in its request and is part of the Baskervill team behind the project’s design. HG Design Studio is the civil engineer and landscape architect.

Tyler, who responded to a call to Cantor, said the project came about from the Libbie property being listed for sale, with Colliers’ John Carpin, Garrison Gore, Malcolm Randolph and Charles Wentworth handling the listing. He said UGL has a contract on the property that’s contingent on the permit getting approved.

Tyler said the project follows in the footsteps of another multifamily development recently approved along the corridor: Eagle Construction of VA’s plan for 14 townhomes at 509 and 511 Libbie Ave.

That site is across the street from The Tiber, a 14-unit condo building with a detached cottage unit that – along with last year’s update of the city’s master plan – got the multifamily ball rolling in the area. Condos also have sprouted with several infill developments and the mixed-use Westhampton on Grove development.

“We wanted to create something that we felt would really showcase what could be done with a condominium project in that community, in a way that would continue to create a more village-type concept,” Tyler said Monday. “With the exception of the Westhampton Theater project, so far, most of the projects that have been in this area have had a single façade, which creates a more suburban-type feel.”

“We wanted to move away from that, similar to what was happening with the last special-use permit project,” he said, referring to the Eagle townhomes. “We felt like we could do that with this condominium project, where we’re creating a point of destination that is unique, but at the same time contributes to the community’s look.” 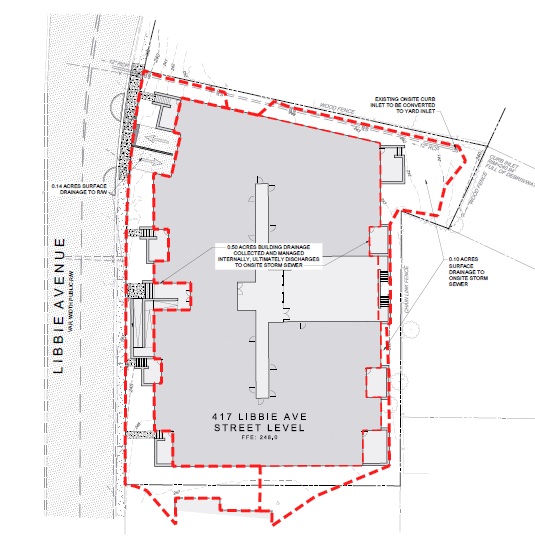 The building’s configuration along Libbie Avenue, with eight condos filling each of the three main floors.

Described as “upscale,” the condos would range from two to three bedrooms and 1,900 to 3,700 square feet in size. Eight units would fill each of the three main floors, with two elevators providing access for all units to the parking garage, which would provide two spaces per unit.

The garage would be accessed off Libbie via a ramp and would include storage units and a trash disposal room.

Tyler said prices for the condos have not been set, and he said a development cost had not been shared. He said the team had been in talks with a general contractor but had not selected one yet.

Tyler said community meetings had yet to be held on the project but that the plans have been discussed with a committee of the Westhampton Citizens Association and Andreas Addison, the area’s city councilman.

The property is owned by Libbie Associates LLC, which acquired it in 2014, according to property records. The city most recently assessed the property at $2 million.

The project adds to a wave of investment in the area that has held steady in recent years and months. Around the corner on Grove, a special-use permit was awarded last month for a new two-story office building at 5605 Grove Ave.

Business rates “should be revalued every year”, property sector says

Business rates "should be revalued every year", property sector says