4 Commission Charts That Explain Both Sides Of The Moehrl Conflict


This is the fifth feature in a week-long series examining the high stakes and potential impact of two closely watched federal lawsuits that take direct aim at how homebuyers pay commissions. Check back later today for the conclusion to the series, and be sure to check out Part I, Part II and Part III and Part IV.

At their core, the bombshell lawsuits homesellers have filed against the National Association of Realtors and major real estate franchisors come down to one thing: money. The money sellers pay agents, but also, the money that agents pay their brokers, franchisors, and trade groups.

The plaintiffs in the so-called Moehrl and Sitzer/Burnett lawsuits contend that NAR, Realogy, Keller Williams, RE/MAX and HomeServices of America have conspired for decades to keep the amount that agents and brokers get paid elevated because that fills their respective coffers. The defendants say those commissions are negotiable and set by the market, not them, for the value that agents provide.

To make those arguments, both sides in the larger of the two antitrust cases, Moehrl, use commission data from the 20 multiple listing services nationwide the lawsuit is singling out in its bid for class-action status, as well as other data sets each side sees fit to compare that data to. Below are four charts that illustrate each side’s take on the conflict, two from each side. One hopes to show the need for change; the other why the status quo is working just fine.

If the court allows Moehrl to become a class action, that would allow potentially millions of homesellers across the country to seek billions in damages for commissions they paid to buyer agents between 2015 and 2020.

In their 1,286-page motion for class certification, the plaintiffs point out that Realtor-affiliated MLSs require listing brokers to offer buyer brokers the same pre-set commission in order to list a property, regardless of the qualifications of the buyer agent or the services that agent offers.

“In a competitive market, economics predicts that the price of a service should be related to the costs of providing that service as well as to the value of that service to its consumers,” Harvard law professor Einer Elhauge wrote in an expert report for the plaintiffs.

“Moreover, economics would predict that if technological advances allow for cutting costs in the face of a decline in the value of that service to consumers, it would lead to the displacement of high-cost providers by more efficient, low-cost innovators. In this market, that has not happened because of NAR’s anticompetitive restraints. Instead, buyer-broker commissions have risen sharply, even though the value and cost of providing buyer-broker services have fallen, and low-cost innovators have faltered because of those anticompetitive restraints.” 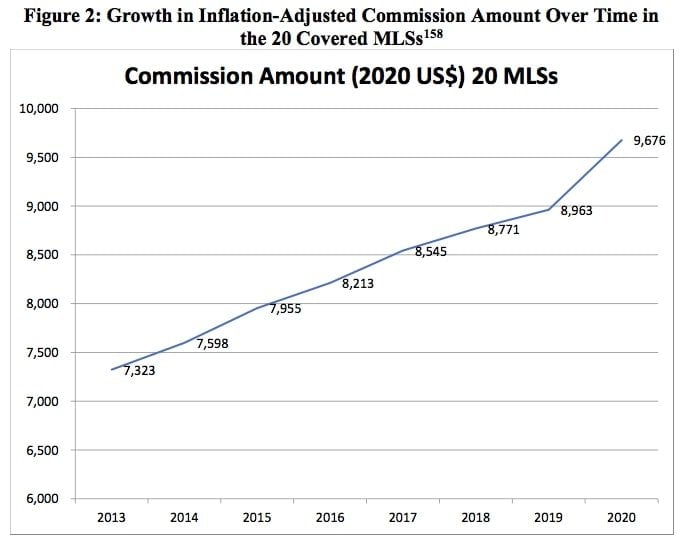 This increase has happened despite technology and the growth of aggregator websites allowing homebuyers to participate more in the home search process and therefore decreasing the importance of the buyer broker’s role, according to Elhauge.

“This contrasts with the more typical, and more competitive, impact of the technological revolution on fees that can be seen in the trends in other commission-based industries that were not subject to the sort of anticompetitive restraints that are being challenged in this case,” Elhauge wrote, citing the travel agent and stock brokerage industries.

He also noted that NAR membership increased some 100 percent between 1993 and 2020, to 1.4 million, even though the U.S. population grew by about 27 percent and home sales grew by about 47 percent during that time. In a competitive market, that disproportionate increase in agents should result in downward pressure on commissions, according to Elhauge.

“Instead, given the anticompetitive effects of the challenged restraints, this increase in the number of brokers indicates that supracompetitive commissions have attracted new real estate agents, but that the challenged restraints and the anticompetitive equilibrium they have maintained and extended has led to intensified, inefficient non-price competition among these agents, rather than direct price competition that would benefit consumers through lower prices,” Elhauge wrote.

That “non-price competition” refers to competing through marketing to gain listings rather than by lowering commission fees. That has resulted in what one researcher, Chang-Tai Hsieh, calls “the tragedy of the commission,” which actually ends up making neither agents nor consumers better off, according to the Elhauge report.

“Because the ratio of agents to buyers and sellers has increased, agents have to work harder to find clients and consequently spend less time actually closing transactions,” the report said.

“In this manner, a larger number of agents dissipates the increased profit opportunities by incurring additional expenses to close transactions. Further, this theory suggests that because agents compete profits away by incurring additional expenses to provide these services, rather than lowering their commission rates, they operate at inefficiently high cost levels.”

This inefficient increase in the number of agents “has generally lowered the quality of such agents because each agent handles fewer home transactions annually and thus takes longer to acquire (or fails to maintain) relevant experience and expertise,” Elhauge added.

Meanwhile, the defendants’ expert, independent consultant Dr. Lauren Stiroh, countered that the growth in commissions is not indicative of anticompetitive prices because agent income has kept pace with statewide median income. 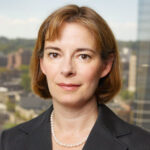 “If, as claimed by Professor Elhauge, there has been a purported anti-competitive ‘real increase in MLS broker compensation’ in recent years, the average income earned by real estate agents would have increased relative to average market income levels over the same period, as agent income largely depends on commissions,” Stiroh wrote. 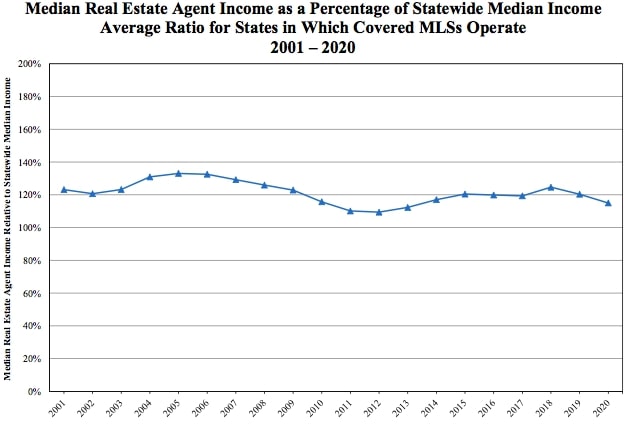 Moreover, she wrote, Elhauge did not provide economic evidence that technology has decreased the value of buyer broker services.

Commissions much higher in the U.S.

Another expert for the plaintiffs, NYU economics professor Nicholas Economides, argued that lower buyer broker commission rates and usages in certain comparable benchmark countries — Australia, the Netherlands, and the United Kingdom — confirm that the rules at issue in the case inflate buyer broker commissions. 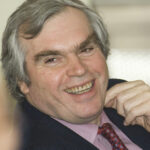 In all 20 covered MLSs, the median buyer-broker rate clustered around a certain percentage, ranging between 2.4 percent and 3 percent, for an overall median of 2.7 percent.

That is much higher than the median buyer broker rates in those benchmark countries — 2.19 percent in Australia, around 1.3 percent in the Netherlands, and around 1.42 percent in the U.K. —  which come to an overall median of 1.55 percent. 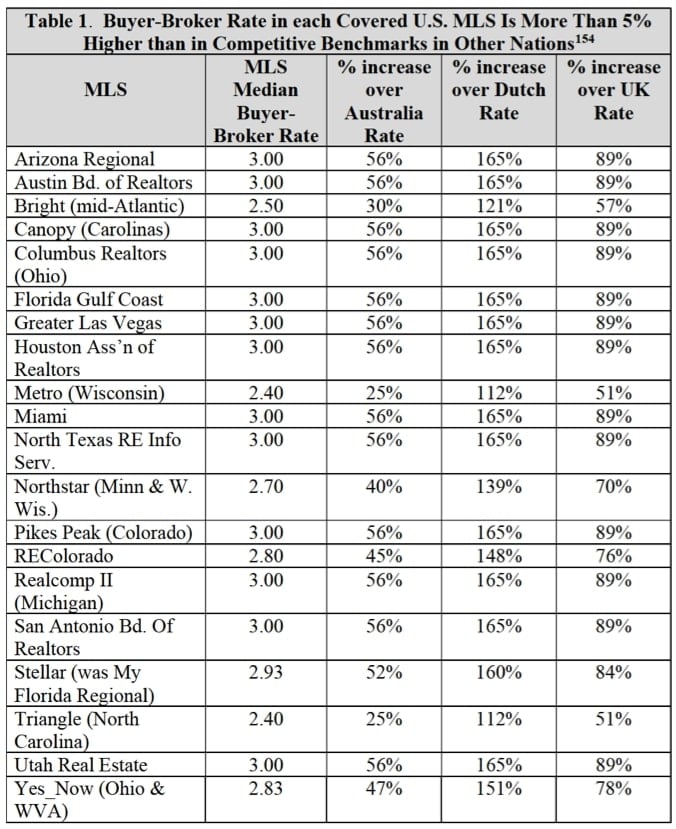 Commissions didn’t change once the requirement was removed

For the defendants, however, a much better benchmark for comparison is available domestically: Washington-based Northwest MLS. In 2019, NWMLS, which is broker-owned and not affiliated with NAR, eliminated the requirement that listing brokers offer buyer brokers a commission to submit a listing to the MLS.

Despite that change, 99.2 percent of NWMLS listings continued to offer a buyer broker commission (flat from 99.3 percent before the rule was eliminated). Virtually all, 94.5 percent, offered a cooperative commission above 2 percent. 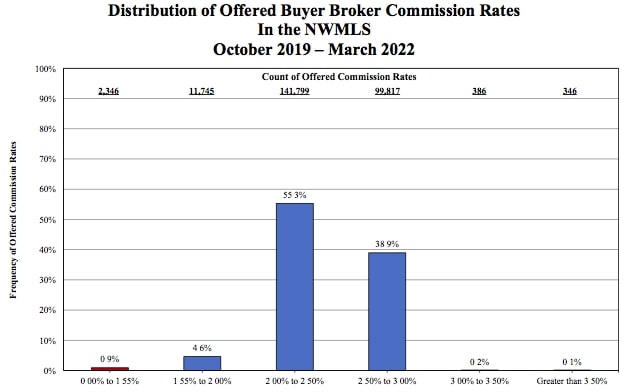 “Unlike the international markets considered by Economides, Northwest MLS is part of the U.S. real estate tradition,” defendants’ attorneys wrote.

“And, unlike Elhauge’s suppositions about what might happen, Northwest MLS shows what did happen when a U.S. MLS made offers of compensation optional. Nearly all listing brokers continued to make an offer of compensation. Nearly all of the offers were greater than the 1.55 percent proposed by Economides.

“Plaintiffs’ experts cannot simply disregard evidence inconsistent with their theories, but that is exactly what they did.”

Tribeca Citizen | The update on 325 Greenwich

Tribeca Citizen | The update on 325 Greenwich