LOVE Island’s Adam Collard was in the process of buying a house with his girlfriend of two years before dumping her to return to the telly villa.

The Geordie hunk is back to woo this years’ cohort four years after his “toxic” 2018 appearance and has declared his last relationship was only “serious-ish”.

He has said in episodes that it ended two months ago but he had mulled over the break-up and “sat on it for a while”.

But The Sun can reveal that Adam had been in the process of buying a house with gorgeous Josie Baxter, who he shares two dogs with and had been with for two years.

He is accused of “engineering rows” to break-up with the gorgeous personal trainer after first speaking to Love Island about a return in April.

Adam finally finished with Josie at the start of June. His lies have driven mutual friends of the former couple to speak out. 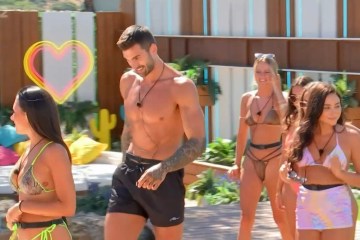 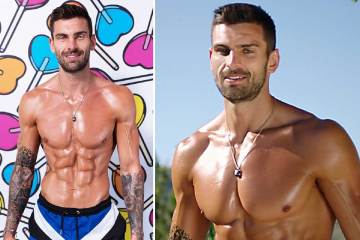 The sources told The Sun that Adam and Josie were both due to fly to Greece to teach classes at a health camp but Adam told Josie he wanted to go alone.

Days later he broke up with the stunning blonde, who still works at Adam’s gym in Newcastle.

Josie has been left devastated by the break-up and declined to comment when The Sun approached her yesterday.

Now Adam is cracking on with pretty Welsh paramedic Paige Thorne, 24, on primetime TV, telling her: “When I’ve been with someone, I’ve never cheated on ex girlfriends or anything like that.”

In a separate chat he told dancer Danica Taylor, 21: “I only really got out of a relationship like two months ago, just over that, but I sat on it for a while. I seem to get a nosebleed at like 18 months.”

A source told The Sun: “As far as Josie was concerned they were serious, they were looking to buy a house together.

“Everything unravelled pretty quickly after Adam first spoke to Love Island at the end of April.

“It’s very awkward as they obviously both work together and so everyone at the gym knows what has been going on. Newcastle is a small place and people talk.”

The Instagram page Josie and Adam run for their two bulldogs states: “We are Storm & Stella. We live at our forever home with @adamcollard & @_jb.pt see what we get up to on the daily.”

Read all the latest Love Island news, gossip and exclusives

Last night, Casa Amor reject Jasmine Nichol hinted at Adam’s deceit, explaining that she knew him through her ex-boyfriend.

Speaking on a podcast she fumed: “He’s definitely trouble.

Our source commented: “It doesn’t take a genius to connect the dots. Poor Josie appears to be collateral damage of Adam using Love Island like a business opportunity.”

A source close to Adam said: “Adam’s only conversations about returning to Love Island were when he was single. Adam was very clear about that during conversations with the team on the show.

“It’s disappointing unnamed people feel the need to suggest otherwise, especially when Adam has no means of defending himself from these allegations. We would urge fans to listen to Adam’s own words on the show.”

When Adam appeared on Love Island in 2018 he was branded a ‘gaslighter’ and Women’s Aid issued a warning to the channel over his treatment of the girls.

He hopped between four women and was accused of each time making them feel like it was their fault.

ITV has an extensive list of duty of care protocols while welfare services offered to islanders include comprehensive psychological support, detailed conversations with Islanders regarding the impact of participation on the show, a proactive aftercare package which extends support to all Islanders following their participation on the show and guidance and advice on taking on management after the show.

A welfare team is also solely dedicated to the Islanders both during the show and after.

We pay for your stories!

Do you have a story for The Sun Showbiz team?