by Doug Hoffer, Vermont Auditor of Accounts Vermont policymakers have grappled for years with how to tackle the state’s persistent homelessness challenge. Prior to the pandemic, Vermont’s Point-in-Time (PIT) Count – an annual one-day snapshot of persons experiencing homelessness – hovered around 1,100 people, but the number increased significantly during the pandemic.

(1) the state expanded eligibility for the General Assistance (GA) Emergency Housing program that houses people in hotels and motels;

(2) because of social distancing, some people who’d previously stayed with friends or family (and were not counted) had to move out and entered a shelter or a motel or hotel through GA Emergency Housing; and

(3) pandemic-exacerbated housing pressures have reduced the number of housing units available throughout the state while prices have soared. Meanwhile, the rise of housing conversions to short-term rentals — there were 6,624 short-term rentals in June 2017, by May 2022 there were 9,272 — has removed thousands of units that might otherwise have been available for long-term tenants or owner occupancy.

Vermont set out to “end homelessness” in 2016. To determine how much progress Vermont was making pre-pandemic, and COVID’s impact on those efforts, my office dug deep into the data to calculate the total amount of money that’s been spent since FY2017 to address homelessness by various state agencies and identify trends in the number of homeless Vermont households each year.

We conclude that Vermont has spent more than $455 million in the last six years. The total amount jumped considerably during the heavily COVID-impacted FY21 and FY22 budgets.

We grouped spending into three main categories that mirror the stages an individual experiencing homelessness might go through:

Prior to the pandemic, the number of people served annually by Vermont’s publicly funded shelters began trending down and declined by almost 15% from its 2015 high of 4,303 individuals to 3,680 in 2019.

Throughout that time period, 200-300 households per night were typically housed in state-funded motel rooms.

By April 2021, more than a year into the pandemic, there were more than 2,000 households staying in a motel or hotel funded by the GA Emergency Housing program.

In addition, significant investments – primarily through the Vermont Housing and Conservation Board (VHCB) – were made to acquire and develop new shelter capacity.

In total the state has spent $190 million on emergency shelter and shelter-based services from FY17 to the spring of FY22, nearly 90% of which was spent during COVID.

We estimate $138 million in total spending on supports and services from FY17 to the spring of FY22.

We estimate that from FY17 to FY22, more than $128 million of public funds were invested to develop or rehabilitate 991 unique units for people experiencing or at risk of homelessness.

The direct impact of these units on homelessness will need to be examined in the future, once they are all constructed, to determine how many actually housed households exiting homelessness at the time of initial occupancy, and how many of those households successfully remained in them. 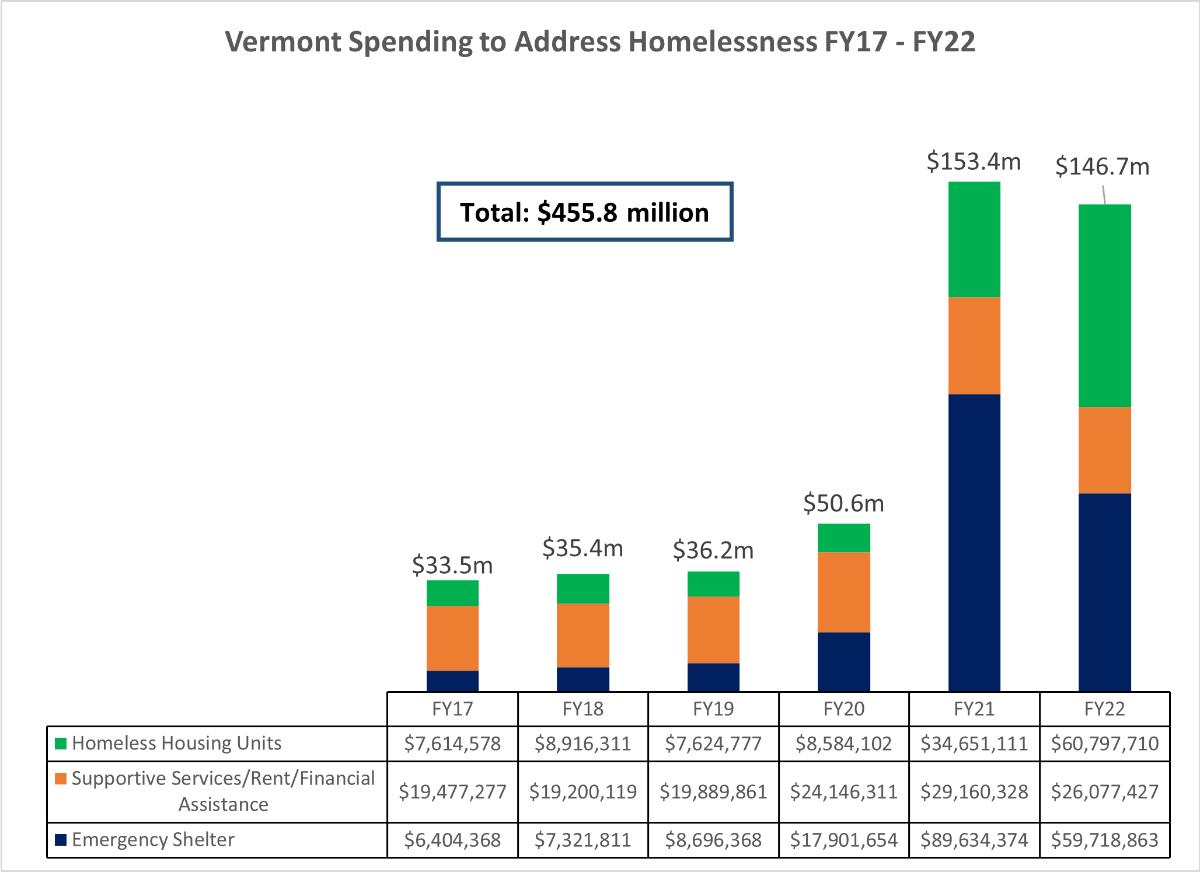 The $455 million detailed above will be followed by continued substantial investments in homelessness in excess of $147 million in the coming year.

Our research included interviews with a range of state and non-state housing professionals. They believe that the priority placed on confronting homelessness has led to some significant systemic improvements, notably the coordinated entry system which features greater collaboration among service and housing providers. In addition, they applauded the collaborative effort to keep homeless households safe during the pandemic.

They nearly universally expressed concerns, though, as well—while Vermont responded quickly and systematically to protect homeless households during the pandemic, the solution has been expensive and relies on short-term federal funding and the willingness of motel and hotel owners to continue to make rooms available.

We heard other concerns about the general inadequacy of available mental health services that allow many homeless households to receive the care they need to remain in transitional or permanent housing.

And finally, we heard frustration that despite all the investment in new units dedicated to homeless households, the problem seems to be getting worse. In other words, while the newly constructed units are extremely valuable for those who reside in them, Vermont is not building its way out of the problem.

One year from now, Vermont will have exceeded half a billion in spending in seven years to address homelessness. While these investments benefited the many Vermonters who received shelter, services, financial support, and/or new housing, it is not clear that there is a unified vision of what a steady state system to address homelessness should look like.

We recommend that the Executive and Legislative branches, working with organizations that serve homeless households, establish a definition of “success” so progress can be tracked.

Homelessness is a complicated public problem, and the pandemic has added to the intensity of it.

Nonetheless, without establishing measurable goals Vermont could easily continue on the current path without knowing whether the combined efforts described in this report have reduced the number of homeless Vermonters at any moment in time. 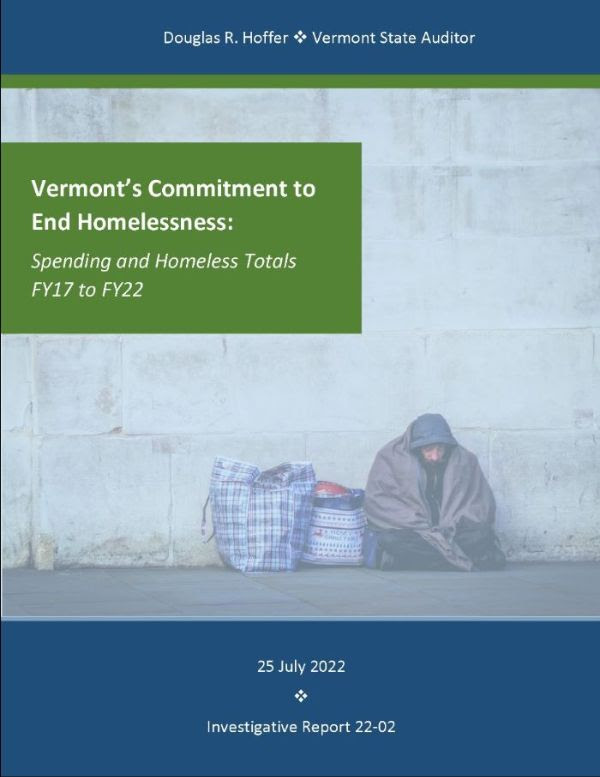