CALERA – Calera Main Street Executive Director Jackie Batson went before the Calera City Council on Monday, May 2 to share an exciting update on the redevelopment of the area, including a proposal of at least $1 million from the county.

A designated Main Street Alabama community since 2019, Calera Main Street started with a vision of revitalizing Calera’s downtown area and has already had $1.4 million invested from the city and another $1.9 million has been invested from private commitments.

In the last three years, they have opened nine businesses amid the pandemic, revitalized multiple other storefronts and have held dozens of events.

They have also started revitalizing the Calera Courtyard by clearing it out and adding parking and fencing. Now, in the last two weeks, they have removed the storage units to create a more open and entertainment and parking area.

That, however, is just the start of what Batson hopes becomes an entertainment hub for the city.

At the City Council meeting, she shared a 30-minute presentation that featured a proposed entertainment district with a green space and much more.

“The vision is to create a thriving revitalized downtown district that represents the family-focused values of a growing city,” she said. “This will include an entertainment district, shops, dining and safe, convenient parking.” 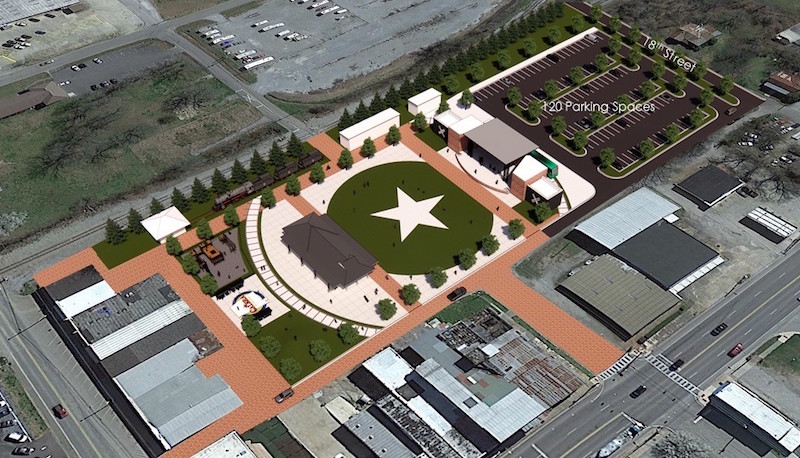 An overview of the proposed Calera Courtyard Entertainment District. (Contributed)

During the presentation, she brought up special guests, including Trussville Mayor Buddy Choat, who shared how their city’s entertainment district helped them for the better, and 58 INC Managing Director Amy Sturdivant, who said it would be a big opportunity for the city to draw more attractive businesses.

She also shared that after a meeting with Shelby County Manager Chad Scroggins, the county was in such favor of the project that they would be willing to give at least $1 million in funding.

“I can’t stress the importance of capturing tourism and potential hotels for those extra taxes,” she said. “It is vital for a downtown area like this, so much so, that I have been given permission to share that we met with Chad Scroggins, our county manager, and he said the county is in such favor of this, that if we move forward, they would at minimum give us $1 million toward this project.”

Batson and Calera Main Street worked to develop a master plan for the area over the last year, but after recently asking Turner Batson to create design concepts, the same company that worked with Trussville, she was blown away.

The design includes a covered stage, a green space, a pavilion, a playground, a kid zone, a splash pad, a train car display, a grassy knoll, a mural, restrooms and much more, while the 17th avenue parking lot is also an exciting addition.

“The wonderful thing about the initiative to revitalize a district is that everybody agrees,” Batson said. “Now, how often does everybody agree about anything, right? We all want more for our hometown. This project will provide an improved quality of life for Calera and South Shelby County residents, as well as all who visit; resulting in additional local revenue, jobs and a renewed sense of community.”

Choat said Calera is in even better shape to produce this than Trussville was because of the space available.

“This is a great vision you have here,” he said. “We took on the same vision a few years ago. I was able to walk the (Calera) area today, and I tell you, you’ve really got a great opportunity that’s a game changer here for Calera. It really is. We put together a plan. (Turner Batsn) came in and saw what we had and we had nothing quite like you have already here.”

He said that since the addition was completed, it has attracted other businesses to come to Trussville, even if they aren’t in that particular area.

“I’m talking about some high end restaurants and we’ve got hotels looking,” he said. “It’s a revenue enhancer. We anticipate just the entertainment district generating $20 million in year-end revenue. This is something that is good for Calera. I say go for it. It will make a difference in not only your city, but the lifestyle and the people that come here.”

Sturdivant built off of that and said the entertainment district would be a good investment.

“We know as we work to attract large major employers in industry in corporate America, as well as the retail that you want, the hotels, all of those things that your community wants, and your visitors, we want to make sure to see that investment because it will bring people who want to invest on the heels of that,” she said. “It will attract more investment in your community.”

Batson said that in addition to the possible funding from the county, there has been a verbal agreement of $300,000 for naming rights, while they have also talked with larger corporations in and around Calera for major contributions.

The next steps include getting permission from the council to form a Calera Downtown Redevelopment Authority and pursue additional funding solutions.

“There are a lot of details that will be decided by the City Council when it is approved,” Batson said.

She said that, due to ABC laws, they have to have four businesses with ABC licenses to define the district as an entertainment district, then the city will be able to put in place rules for that district such as dates and times that open containers would be allowed.

“Just one of the things that will be a product of this revitalization plan is that the entertainment district, once we get this district approved, then people will be able to purchase a drink and be able to walk outside with it through a festival,” Batson said.

She added that it is a great chance for the city.

“It’s such a wonderful opportunity for Calera for us to grow in the right way and have things for our residents and our visitors to do,” she said. “I just think it’s going to add a city center type amenities package that everyone can enjoy.”

Batson said that it is in the beginning phases and a timeline is still being developed with hopeful progress in the first year.

She said she hopes the entertainment district can be applied for next year, while the rest of the project will follow.

“We’re talking about a major, major building project,” she said. “When you’re talking about the park and a big V and stage and pavilion and all the pavers and a boutique hotel and renovating all the buildings. That’s probably going to take a few years to see it all completed.”