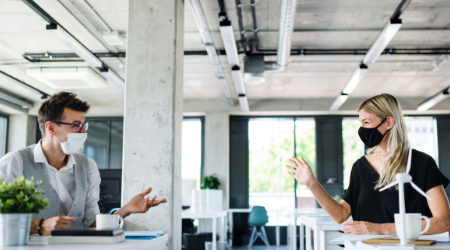 Many U.S. companies will reduce their commercial office footprints in response to the COVID-19 pandemic, some experts have said. Or, companies will retain the same amount of space, other experts predicted.

If you sense that none of the experts who’ve offered wildly varying predictions on the shape and size of post-pandemic commercial offices know for certain, you’re right. Now, though, facts about the plans of U.S. companies are emerging from those who actually know — companies themselves.

In a survey of 3,115 U.S. office space decision-makers and influencers, BOMA International found that 55 percent of tenants said they were reassessing space needs, which was a decline from 61 percent in BOMA’s Q4 2020 survey, according to Globe St. Forty-eight percent of those respondents likely to reassess needs said they would reduce their square footage. In 2020’s Q4, 54 percent had said they were reducing space needs.

By comparison, a recent CBRE survey indicated that just 9 percent of companies plan to significantly shrink their office portfolios — far less than last year’s 39 percent. Of the 185 companies surveyed by the CBRE giant in its Spring 2021 Occupier Survey, 85 percent say they expect employees to spend at least half of their time in a physical office.

Read next on FacilitiesNet