Dovetail Construction pulling out of rehabbed trolley barn in Northside 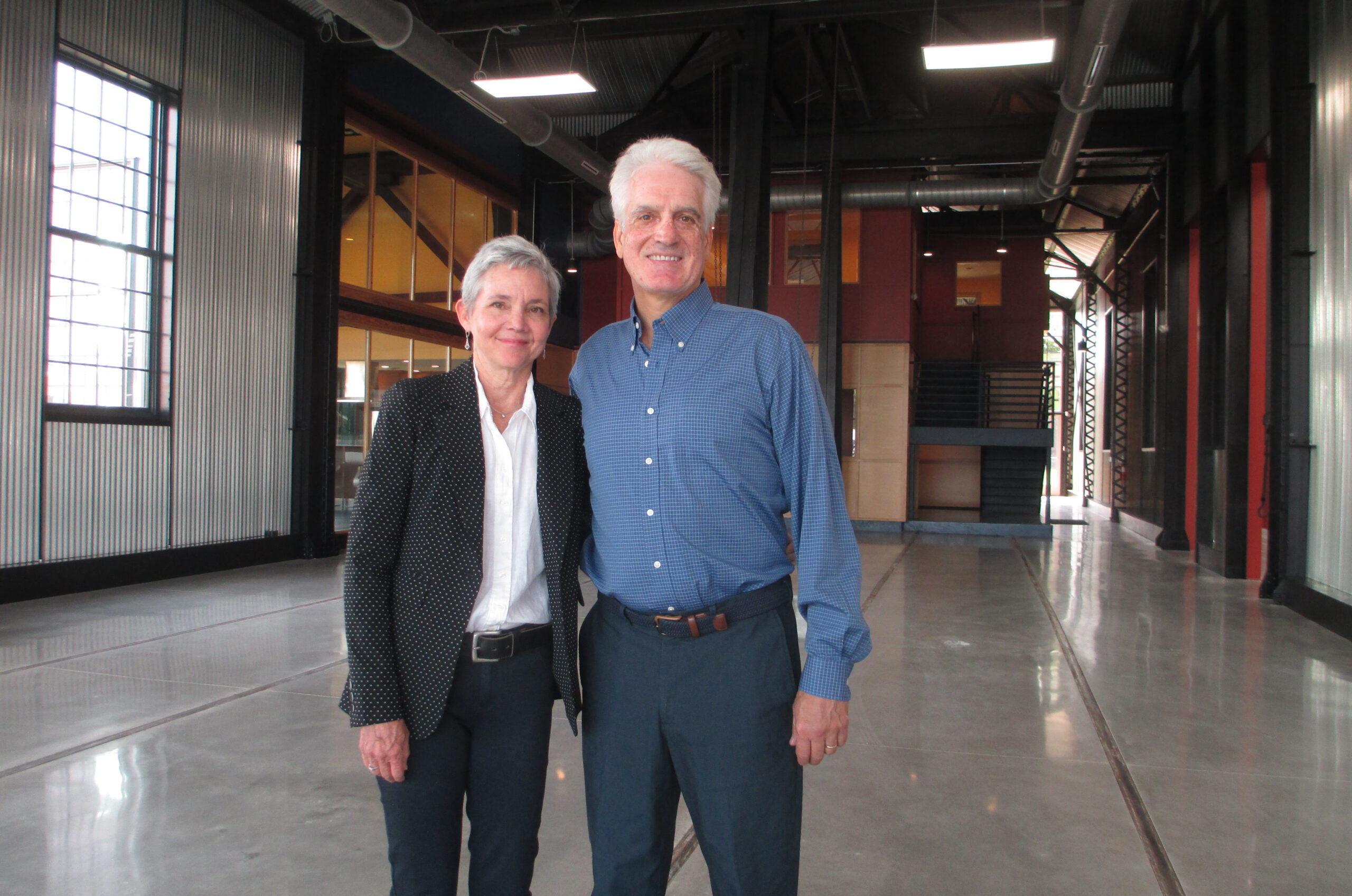 Julie and Paul Weissend in the former trolley barn that they converted into an office for their Dovetail Construction firm, which is moving out. (Jonathan Spiers photos)

After turning a piece of Northside into their own version of Oz, Julie and Paul Weissend are looking to hand over the keys of their industrial building-turned-office aptly nicknamed The Emerald Barn.

The wife-and-husband owners of Dovetail Construction Co., which has been based in the former trolley repair shed they converted as their headquarters a decade ago, this week listed the building at 1620 Brook Road for lease after completing an addition that doubled its usable square footage.

Now totaling nearly 12,000 square feet of rentable space, the building — the first in the U.S. to be certified LEED Platinum and net zero energy and be listed on the National Register of Historic Places — is being offered for lease as the Weissends transition their business from primarily higher-end residential construction to development projects like this one.

“We are pivoting personally and wanted to see about developing things more. This is kind of our first experiment,” Julie said. “We decided that we wanted to wind out of the general contracting. It’s been 33 years, and we just wanted to do more of the strategic — the design and the planning.”

As the company’s only employees, the Weissends are moving Dovetail’s offices out of the building, likely to their home on Monument Avenue, Weissend said. At one point totaling 30 employees, the company now enlists subcontractors as needed. The structure on Brook Road dates back to 1907 and originally was used to repair electric railway cars.

“It’s down to us and the subs we’ve been working with for 30 years. So, from an employee standpoint, we don’t need a huge office anymore,” she said.

The Weissends will continue to own the property, which they bought in 2005 for $250,000 and rehabbed in 2010. With the addition that was completed over the course of the past year, Paul said they’ve put about $3 million into the property overall.

Built in 1907, the structure originally served as a repair barn for electric railway cars. Rail lines that brought the cars in one end and out the other are visible in the building’s concrete floor, and a still-operable gantry crane hangs from the ceiling.

The only original part of the building is its riveted steel frame, which accents the interior and helps to buffer sound in the building’s larger spaces, Julie said.

“It was state-of-the-art then. It was partially prefabricated,” she said. “It has embossed in certain places on the frame ‘Carnegie 1903,’ so they planned it and did some riveting before they sent it, and then they did other components in-place. For 1907, that was pretty amazing.” 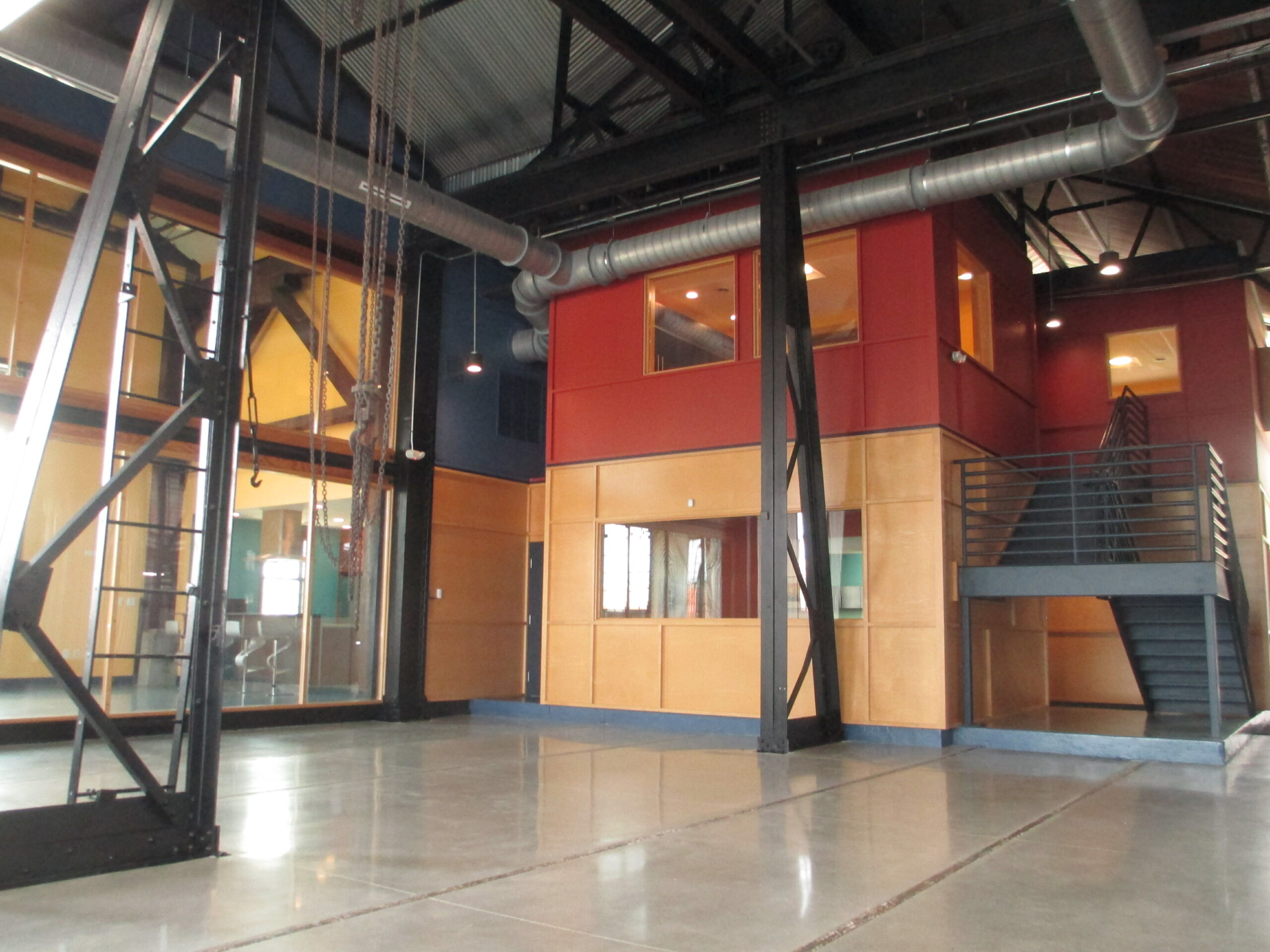 The building’s main space features an operable gantry crane and rail lines that are visible in the floor.

Later used for repairing tractor-trailers, the building was in rough shape when Julie spotted it while searching for a location for their business after working out of their then-home in the West End.

A fan of “The Wizard of Oz,” Julie said she was drawn to the property in part for its view of the city skyline, which to her resembled the Emerald City.

“We love ‘The Wizard of Oz,’ and to me, the city in the distance looks like Oz,” she said. “And we want to be inspiring and be inspired ourselves, and we want to come to a fun place to work.”

Weissend added, “It was kind of a joke. The entity that owns this is Yellow Brook Road,” referring to the LLC they used to purchase the property. “And in the movie, it’s kind of monochromatic on the outside, and inside we made Technicolor. It just kept going from there. We literally have a yellow brick road entrance.” 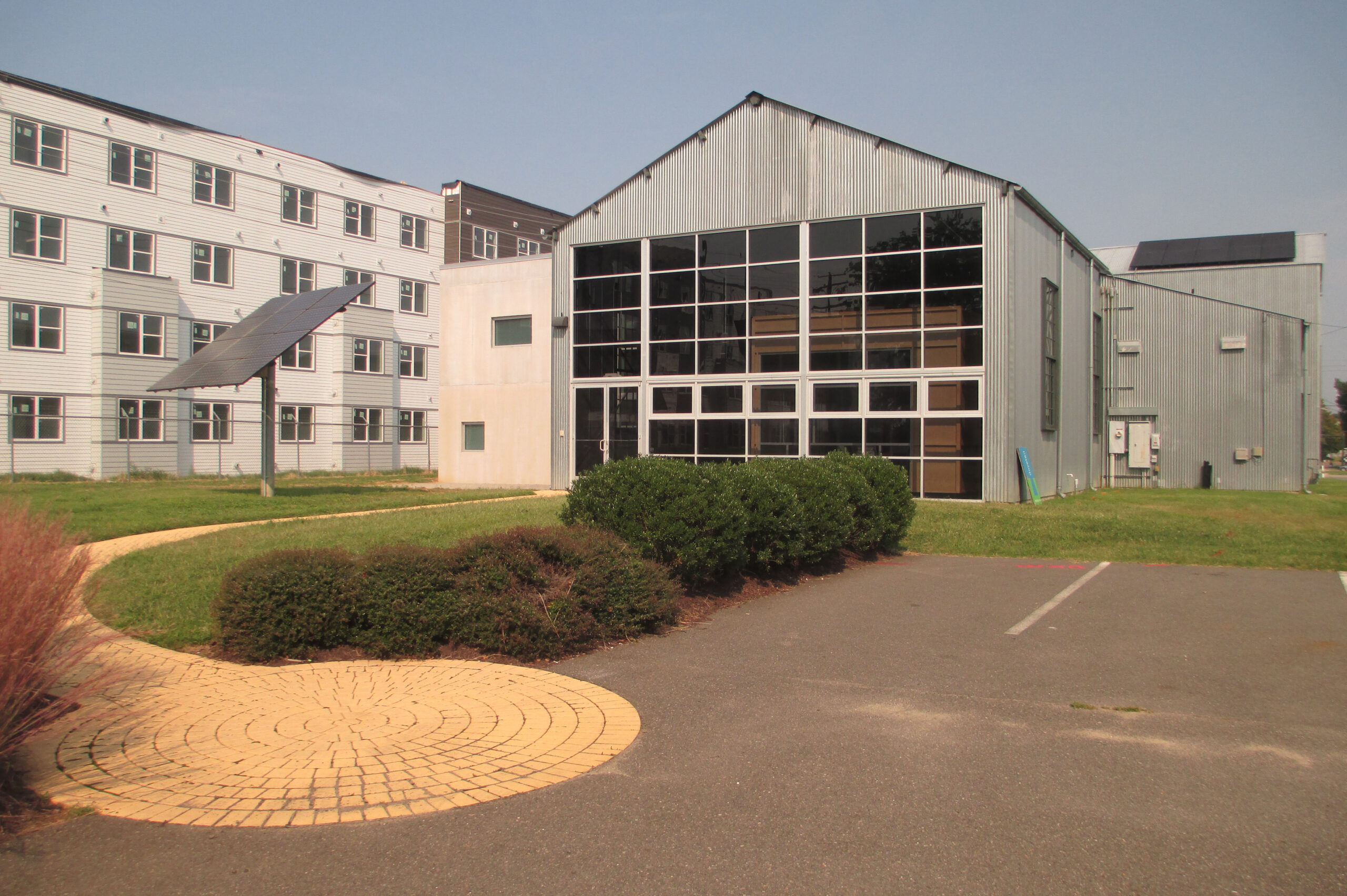 A “yellow brick road” sidewalk leads to the building. The Foundry Apartments are visible beside it.

Working with Walter Parks Architects and engineering firm CMTA, the couple designed the building’s interior to look like something over the rainbow, with walls and railings accented with bright colors that contrast the building’s gray walls and floor.

Highlighting its part in Richmond’s history as the birthplace of the first citywide electric streetcar system in the country, the Weissends successfully petitioned to have the trolley barn added to the National Register of Historic Places.

That allowed them the use of historic preservation tax credits, which in turn, Weissend said, subsidized the costs of achieving LEED Platinum status – the highest Leadership in Energy and Environmental Design certification awarded by the U.S. Green Building Council.

“Then Paul said it would be so cool to do net zero,” she said, referring to the energy standard achieved by negating greenhouse gas emissions. “It turned out it was the first building in the United States to be those three things: LEED Platinum, on the national register and net zero.”

With the addition, which they were planning prior to COVID, pandemic-era features such as touchless faucets and an air filtration system were incorporated in the space, which Weissend said is about one-third the size of the original building but doubles its square-footage with an upstairs mezzanine factored in. 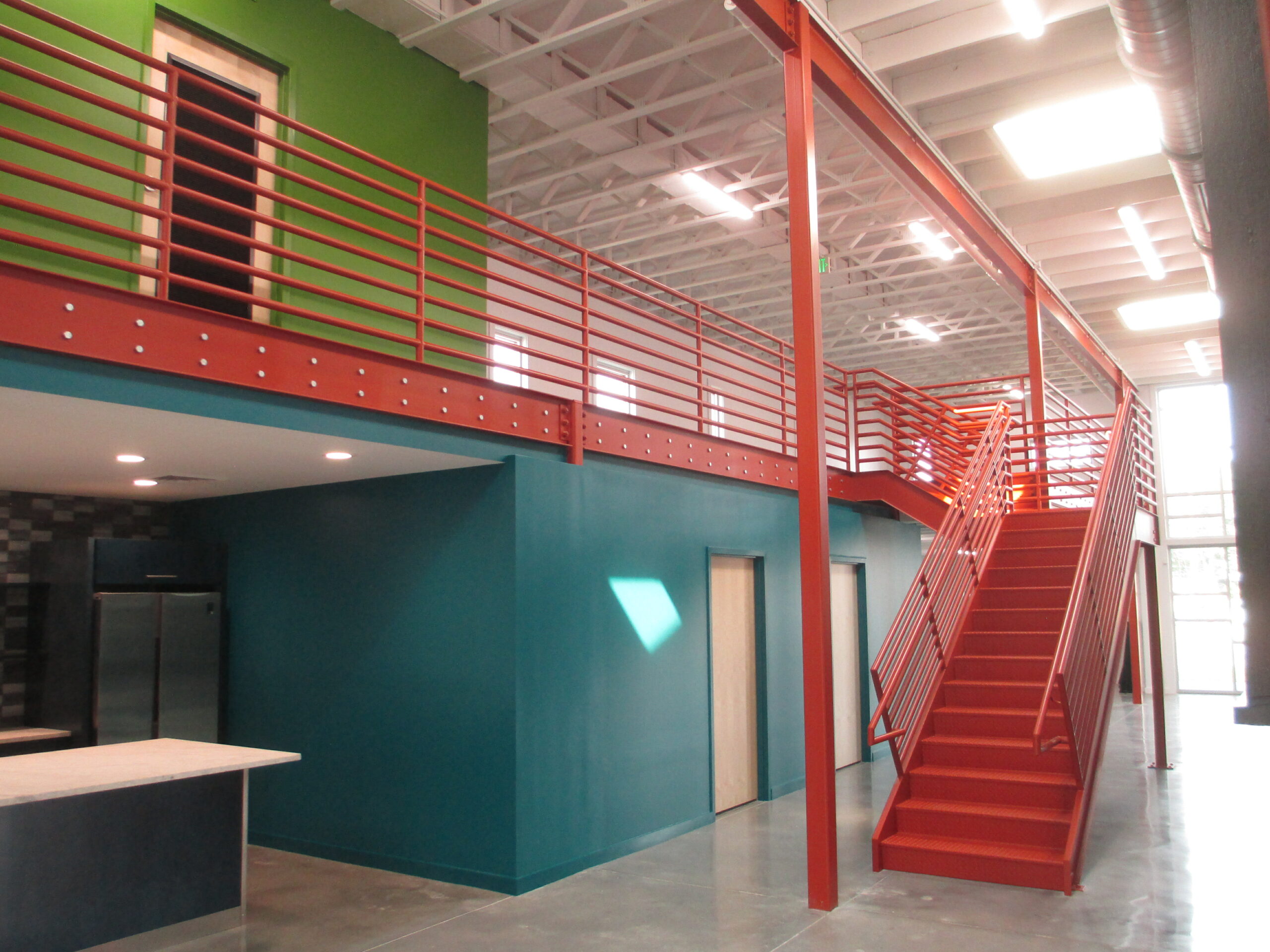 The addition’s mezzanine adds to the building’s rentable square-footage.

She said the addition was prompted by plans for The Foundry apartment buildings under construction next door, and the loss of their property’s westward view. With skylights providing overhead natural light, window placements were oriented to turn occupants’ attention inward, she said.

“Knowing the apartments were coming, we wanted to get out in front and then control the view and make it so you’re looking at the cool, fun part that we created, instead of in somebody’s apartment window,” Weissend said.

Of the new buildings, she added, “I’m happy about the energy and the diversity. Mixed-use is totally the way to go, and there isn’t an office like this. So, this helps complement the spectrum that’s available.”

The whole building includes two kitchens, various meeting rooms and workspaces, and storage for bicycles. Two patios and greenspace fill the rest of the 1.1-acre property, which includes freestanding solar panels and a new parking lot with 32 spaces. A metal fence along Brook Road was required and also added, Paul said.

Depending on the use, the Weissends expect to rent the space from about $22 to $25 per square foot. While they described that range as high for the neighborhood, they said it’s justified given the building’s quality and the amount of investment and development activity seen in the neighborhood of late. 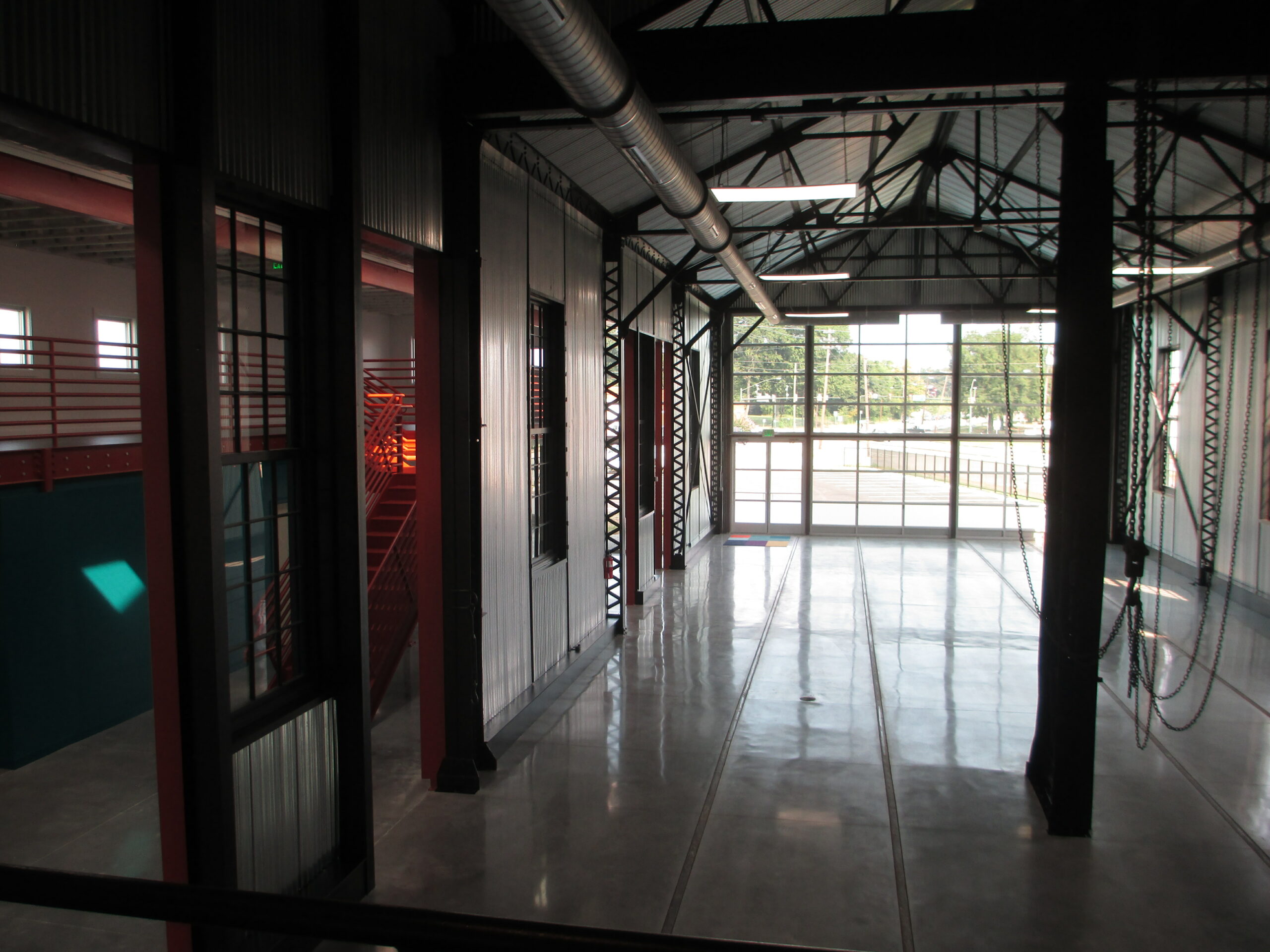 A second-floor view of the main building space with the addition on the left.

As for what’s next for Dovetail, Julie said she wouldn’t say no to another industrial rehab, possibly for a company office down the line. While it’s moving toward property development, the company’s residential work over the years has included a restoration with Mako Builders of the 1920s-era Tudor Revival mansion at 5103 Cary Street Road, as well as of their own home at 2710 Monument Ave.

“I’d love to do it again. I’m always looking,” she said of the company’s move toward property development. “I haven’t been on the Southside that much, and the whole Manchester area, there’s some interesting old buildings there where we could potentially do a similar thing.”