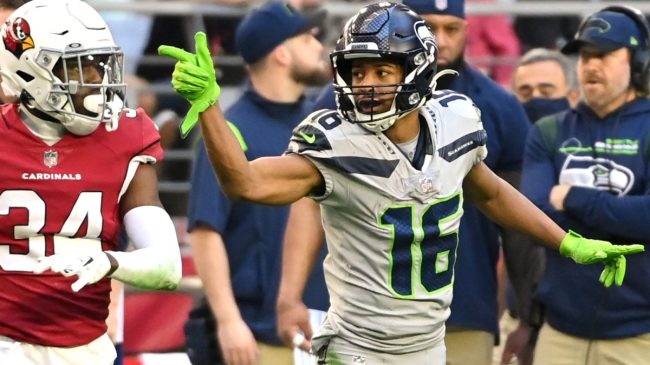 On Monday, the world was introduced to Tyler Lockett, real estate agent. The Seattle wide receiver is leading a double life as a licensed home seller in Washington.

The All-Pro pass catcher is known for his abilities on the field. He hauled in 73 catches for a career high 1,175 yards in 2021 to tally his third straight 1,000-yard season.

Unfortunately, he’ll have to follow up with a new quarterback next year. Russell Wilson is off to Denver after being traded this offseason, meaning Geno Smith or Drew Lock will take over under center.

Still, it appears that Lockett is in the prime of his playing days. While he’s far from putting football in the rearview mirror (he recently signed a four-year extension with the Seahawks worth $69.2 million), he’s also making strides as an agent.

On Monday, he announced that he’s closed on his first home sale.

The NFL world was quick to react, with fans and teammates posting their congratulations on social media.

Congrats bro!!! Finding your second passion is an amazing thing!

A number of players commented on the accomplishment, offering support of Lockett’s second passion. It seems he’s succeeding both on and off the field.

Lockett said he first got into real estate because it is a great way to make a difference in people’s lives. Now, he’s selling multi-million homes as a side gig. His love for HGTV didn’t hurt either.

And be sure to tune in on Sundays as he dominates on the gridiron.