The almost 90% leased office property is just a block away from another Preston Center office that just sold for a record price.

Terms of the One Preston Centre sale were not disclosed. Commercial property firm Newmark handled the sale.

“Given the limited amount of investment opportunities in this high barrier-to-entry submarket, we saw tremendous investor appetite from local and institutional capital alike,” Newmark’s Chris Murphy said in a statement. “Preston Center will continue to be the investor and tenant submarket of choice given a confluence of factors, namely its position among the city’s most influential residential neighborhoods and ease of access offered by its proximity to the tollway.”

Built in 1981, the building is in one of Dallas’ priciest office rental markets.

The sale of One Preston Centre follows the recent purchase of the nearby Terraces Offices on Berkshire Lane.

Vancouver-based City Office REIT Inc. paid $133.5 million — or $773 per square foot — for the Preston Center office building. That’s one of the highest prices ever paid for a Dallas office building.

The Preston Center sales follow a series of other recent Dallas-area office acquisitions by investors that are hoping to take advantage of North Texas’ growing economy. 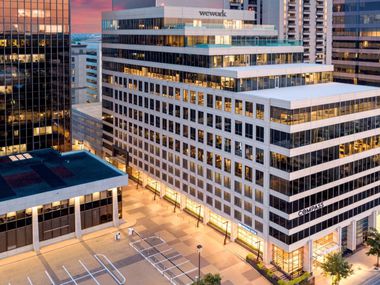