Norwich City: Mark Attanasio’s potential investment and what happens next


It was at the end of May that The Athletic broke the news of Michael Foulger’s intention to sell his 18 per cent stake in Norwich City.

His video, recorded before Norwich’s final pre-season friendlies in Scotland at the weekend and released on Monday night, was the club’s first public statement on a widely-speculated issue – one that has pointed towards Major League Baseball team the Milwaukee Brewers’ owner Mark Attanasio being the man to purchase Foulger’s shares.

“We are really excited by the potential additional expertise we will have coming onto the board, as and when that time comes to pass,” Jeffery said.

His answer was near-identical to the one given by finance director Anthony Richens the previous day at a fans’ forum at Edinburgh’s Apex Waterloo Place Hotel.

On both occasions, there has been real care not to mention the word “investment”, despite the clamour from media and supporters alike.

So allow The Athletic to break down where the matter stands, what is likely to happen next and explain how the club’s future could look.

What do we know so far?

The known facts are quite straightforward.

Foulger became a Norwich director at the same time as current joint majority shareholders, Delia Smith and Michael Wynn Jones. The trio celebrated that 25-year anniversary last year and can take much credit for the way they have taken guardianship of the club in that time.

Smith and Wynn Jones effectively run Norwich City and have the volume of shares (53 per cent jointly) to ensure their voting power is final, although they have always publicly seen it as more of a collective responsibility across the board.

Foulger’s role has been supportive of that.

He has been deputy chair since 2009, although Norwich have not had a chair since Ed Balls’ departure at the end of 2018. However, for about a year now, Foulger has become progressively more open to selling his shares, a situation brought to life once there was external interest in getting involved at Carrow Road.

Jeffery acknowledged Norwich are extremely grateful to Foulger in allowing them to play a part in the sale process: “It cannot be understated the significance of Michael allowing the club to assist in the selling of his shares. He could have gone independently on that. But as always with Michael, he has got yellow and green in his blood. He certainly has the best interests of the club at heart.”

The above is true. The sale of Foulger’s shares is a private matter, and there is no requirement for him to involve the club. It speaks of the respect he carries for Smith and Wynn Jones that he wanted them involved in a process that, at least initially, is solely about him selling his stake. 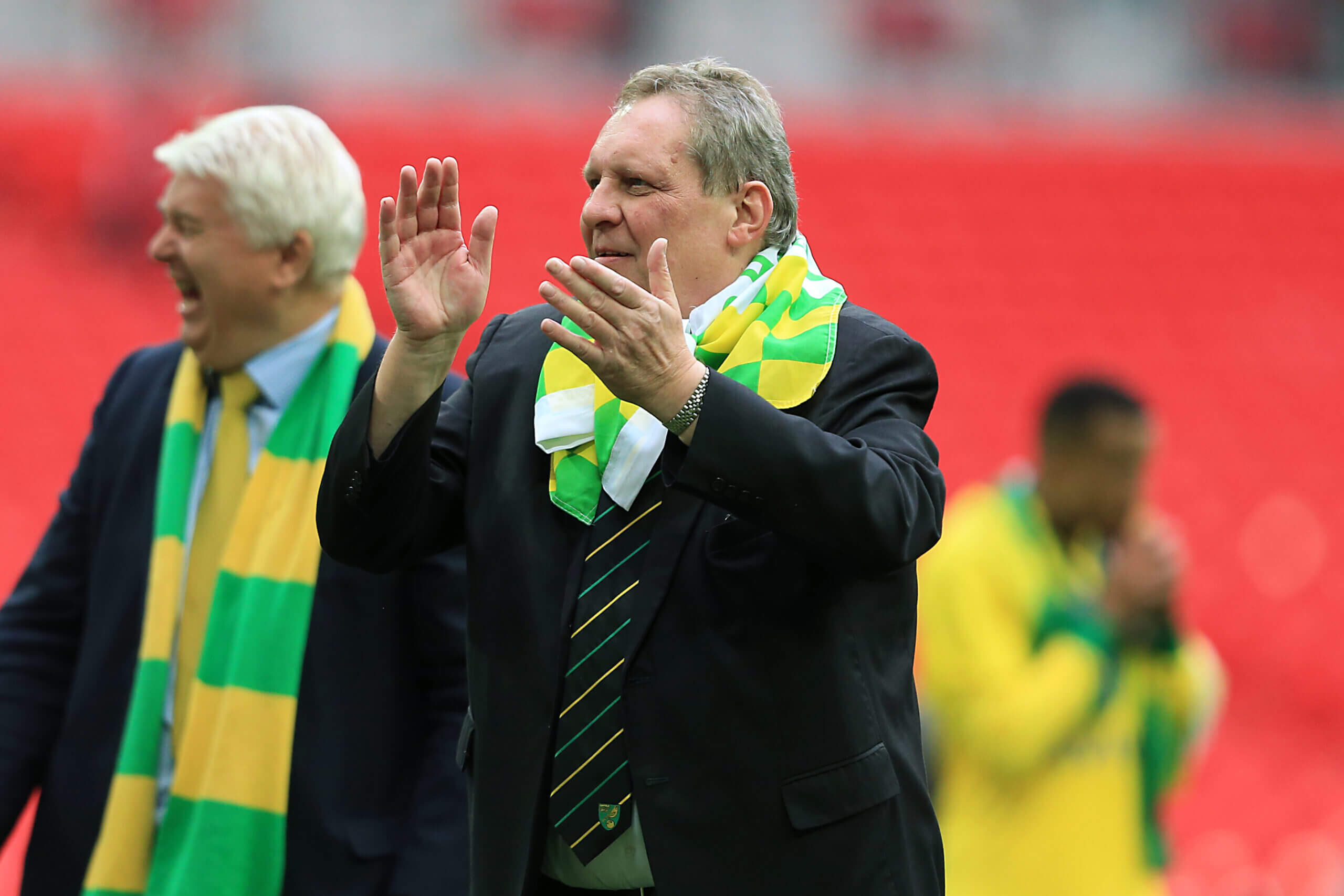 It is also true that the sale of Foulger’s shares does not automatically equate to his departure from Norwich’s board, even if that may end up being the result. There is certainly room for him to remain if he, Smith and Wynn Jones feel it would work.

Norwich have five directors currently: Foulger, Smith, Wynn Jones, their nephew Tom Smith – who is currently set to inherit the joint majority shareholding – and recently-appointed executive director Zoe Ward. The club’s articles of association allow for up to eight directors.

There is already a vacancy, though, with Stephan Phillips resigning from the board in June after 13 years.

Jeffery stated the share sale process is expected to be concluded “in the coming weeks” and it will result in at least one new face in the boardroom.

Well, there is one person conspicuous by his absence in that last section: Attanasio.

Confidentiality agreements on all sides mean there is nothing on the record anywhere from either party detailing who is involved. Nor is there likely to be until the matter is completed, and it should be noted that is still some weeks away.

Norwich have been keen to suggest they have interviewed “a number of potential purchasers”.

However, the only party known to have visited Norwich is Attanasio, along with an entourage of seven that included his longstanding business associate, Richard Ressler, Attanasio’s two sons, Brewers officials and those tasked with brokering a deal.

The only reason it became public knowledge was due to a canny photographer and a leaked guest list during their stay in Norfolk.

An asset management firm that specialises in higher-risk investments, it has its headquarters in Los Angeles, other offices in Boston, London and New York, and has £30billion ($36.3bn) of assets under management. Attanasio has owned the Brewers, based in Wisconsin in the United States’ Midwest, since 2005.

The Athletic understands Attanasio’s party is the only one currently in dialogue with Norwich regarding Foulger’s shares.

Firstly, a deal needs to be completed, and it remains to be seen exactly how long that actually takes.

When speaking to those involved, the mood is generally positive over the process and that this will get done.

It is worth remembering this is all about Foulger selling his personal shares in the Championship side – a minority stake. It is considerate of him to include Norwich in the process because it helps ensure the club and his friends, Smith and Wynn Jones, are not left in business with someone they could not work alongside in future. This is not something he is legally bound to do.

Likewise, the sale of his shares does not automatically equate to immediate — or indeed any — investment into the football club. More on that in a moment.

However, perception is key and Norwich may want to wait until towards the end of the summer transfer window before they conclude any deal that may look, externally at least, like they are suddenly in cahoots with a very rich man.

What will it mean?

Confirmation of the deal is likely to be accompanied by at least one name who will join Norwich’s board.

It remains to be seen who that will be. A seat on the board is not an automatic requirement of buying Foulger’s shares, but it will be the likely result. That is why Foulger has included the club in the process.

What else will it mean? It is difficult to be sure before it’s all done and dusted but the right questions will generally bring the right answers.

US investors have been open to taking on minority stakes in football clubs so they can test the waters. They can see if things will be workable in future and either push on or get out again. They have enough capital to commit a relatively small initial investment, as they view it (but significant for Norwich in the short term), and see how it goes.

They have also often proven to be patient.

That was the case when Attanasio and Ressler first got involved with the Brewers in 2003 — taking a small stake and looking to the next 20 years at how that might develop.

Other examples include 49ers Enterprises’ staged takeover at Leeds United and Stan Kroenke at Arsenal. It is not just US investors either — see Daniel Kretinsky’s pathway to ownership at West Ham.

US investors’ interest in European football clubs is a current trend for a reason.

Wealthy Americans and big US-based financial institutions have noticed that investing in sport can be profitable. Costs are arguably better controlled in the US, given salary caps and the attempts at even talent distribution via drafts of players leaving the college level.

European football is a completely different beast. Most clubs are losing money, for starters. But that is what makes them cheaper to US investors. The average Major League Soccer franchise is valued at £450million – 50 per cent more than Newcastle United were sold for last October.

Americans can see soccer, unlike the helmets-and-pads sport they call football, is the global game and that its popularity is growing fast in North America too. They believe they can solve European football’s financial issues with some US thinking on commercial growth, media rights, revenue-sharing and cost controls.

Therefore, it is no coincidence that American interest in Football League (EFL) teams has increased since the English game started talking about a fairer distribution of money from the Premier League downwards, as well as greater cost controls.

Add in the dollar’s current strength against the pound and euro, and overseas investments have become cheaper and less risky. Frankly, there has never been a better time to have a punt on soccer.

So for Norwich, Attanasio’s arrival would ultimately mean a significant change in dynamic given a notable external influence coming into the running of the club – especially given Smith and Wynn Jones will remain the majority shareholders and have no plans for that to change in the foreseeable future.

Anything else to add?

Jeffery’s answer to a question about “US investment” was the climax to a lengthy video that made for interesting viewing.

Its aim was clear: to improve communication with the club’s fans; something that came in for criticism during last season and earlier in the summer. You can watch the video in full below.

But if you just want the headlines…

Legends International has been contracted to look into how Norwich can redevelop the City Stand, which is the oldest at Carrow Road, the one primed for redevelopment, and a project that will need to be undertaken in the coming decade, mostly to improve facilities such as dressing room and media space, as well as increasing the stadium’s 27,000 capacity. The club are looking to build over the current stand if possible.

Safe-standing remains on the agenda and consultations are continuing on how and where to fit that into the stadium, while also monitoring the costs involved. A decision is expected in the next 12 to 18 months.

The latest redevelopments at Norwich’s Colney Training Centre began on Monday and are due to be completed towards the end of next year. These include a swimming pool and recovery hub for players.

Norwich have also vowed to “never again” have a betting brand on the front of their players’ shirts, even if it is more lucrative than other sponsorship deals. They have decided to bring in their own self-regulation. BK8: Never forget.

Jeffery also addressed the new partnership with Brazilian club Coritiba. Norwich are hopeful that retail and commercial opportunities will be exploited in a post-Brexit world, while three youngsters from Coritiba’s youth set-up will be on trial at the club in the autumn – although Coritiba have already made the point that it will be for them to gain experience, rather than any initial recruitment opportunity for Norwich to sign them.

You can also expect Norwich to play Coritiba in a friendly at some point, and a tour to Brazil is likely.

But it was the last 80 seconds of the video that most people had been waiting for.

It did not end the waiting, but certainly brings the end a little closer.

This Texas woman is fighting for her home, and all she wanted was to replace her roof