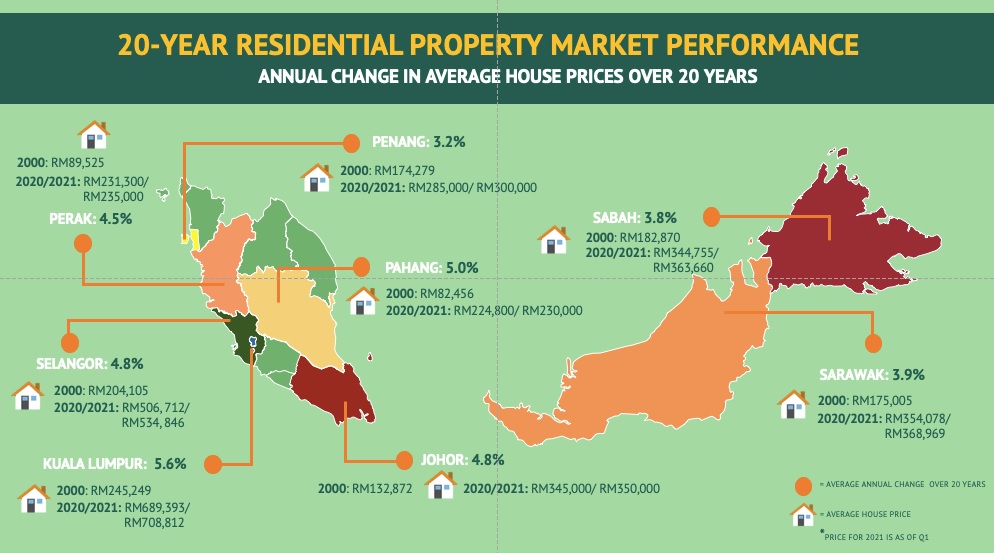 The contraction of house prices was due to property overhang in 2019, with KL experiencing one of the highest property overhang in the country. The situation prompted developers to lower the pricing of affordable housing units, reflecting the contraction of average house prices. On the other hand, the annual change in 1Q2021 increased by 2.82% due to favourable government initiatives, such as the 1.75% Overnight Policy Rate maintained by Bank Negara Malaysia.

Being the most populous state in Malaysia and the highest contributor to the nation’s gross domestic product with a large proportion of manufacturing, warehousing and port-related activities, Selangor has been able to sustain the demand for residential properties over the years and provided a buffer against any drastic price drop in the state.

Johor recorded the highest property overhang in 2020, where most of them were condominiums or serviced apartments. The majority of the overhang property was located in the Iskandar Region where developers originally built the house units targeting the foreign market.

The decreasing average house price in 2018 and 2019 might have been due to developers offering more affordable house units to reduce the property overhang in Penang. As a result, most property prices in Seberang Perai dropped by 5% to 10% in 2020. The increase in average house price in 1Q2021 could be due to a positive response from the reintroduction of the Home Ownership Campaign (HOC).

The affordable prices offered for most properties in Perak matched the general public’s income levels, which have contributed to the steady increase in Perak’s average house price. This circumstance has led to the rise in demand for properties, especially landed properties, despite the effect of the Covid-19 pandemic.

The majority of the price growth was from landed properties as the purchasers in Pahang prefer landed over high-rise residences. The price growth in 2020 and 1Q2021 could be due to the boost given to home sales under the HOC or Short-Term Economic Recovery Plan (PENJANA).

Despite the falling of house prices in 2019 (-0.29%), they rose gradually in 2020 and 1Q2021 by 3.83% and 4.21% respectively. Purchasers enjoyed the HOC and low bank interest rates offered by the government, which helped contribute to price growth in 2020 and 1Q2021. The low loan interest of 1% provided by the state government for house buyers from the B40 group helped maintain a positive annual growth.

Owing to the Covid-19 pandemic, developers had to lower their house prices by 20% as they focused on pushing existing projects in 2020. On the other hand, the HOC 2021 campaign helped rebound the market for 1Q2021.

The average house price for the eight states in Malaysia has shown significant growth over the 20 years. KL and Pahang have the most notable average annual changes above 5%.

The incentives provided by the government to boost the property market that was affected by the Covid-19 pandemic have helped several states to achieve a steady increase of the annual change growth for the year 2020 and 1Q2021.

Get the latest news @ www.EdgeProp.my

Subscribe to our Telegram channel for the latest stories and updates