Shares of Taylor Morrison Home Co. (NYSE:TMHC – Get Rating) have received an average recommendation of “Hold” from the eight ratings firms that are currently covering the stock, Marketbeat reports. Four equities research analysts have rated the stock with a hold recommendation and three have issued a buy recommendation on the company. The average 1-year price objective among brokerages that have issued ratings on the stock in the last year is $31.14.

Taylor Morrison Home Corporation, together with its subsidiaries, operates as a public homebuilder in the United States. The company designs, builds, and sells single and multi-family detached and attached homes; and develops lifestyle and master-planned communities. It also develops and constructs multi-use properties consisting of commercial space, retail, and multi-family properties under the Urban Form brand name; and offers title insurance and closing settlement services, as well as financial services. 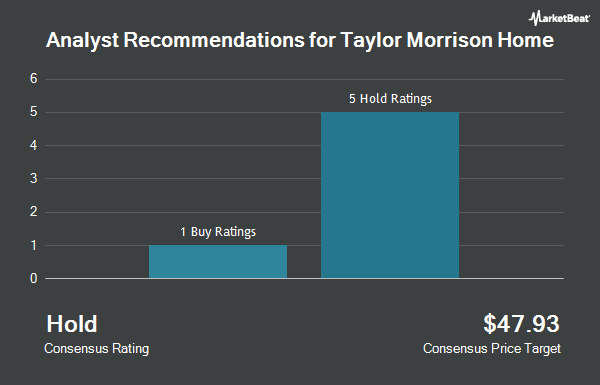 This instant news alert was generated by narrative science technology and financial data from MarketBeat in order to provide readers with the fastest and most accurate reporting. This story was reviewed by MarketBeat’s editorial team prior to publication. Please send any questions or comments about this story to contact@marketbeat.com.

Should you invest $1,000 in Taylor Morrison Home right now?

Before you consider Taylor Morrison Home, you’ll want to hear this.

MarketBeat keeps track of Wall Street’s top-rated and best performing research analysts and the stocks they recommend to their clients on a daily basis. MarketBeat has identified the five stocks that top analysts are quietly whispering to their clients to buy now before the broader market catches on… and Taylor Morrison Home wasn’t on the list.

While Taylor Morrison Home currently has a “Hold” rating among analysts, top-rated analysts believe these five stocks are better buys.

What house? Young couple has sold up, bought a caravan and hit the road

What house? Young couple has sold up, bought a caravan and hit the road